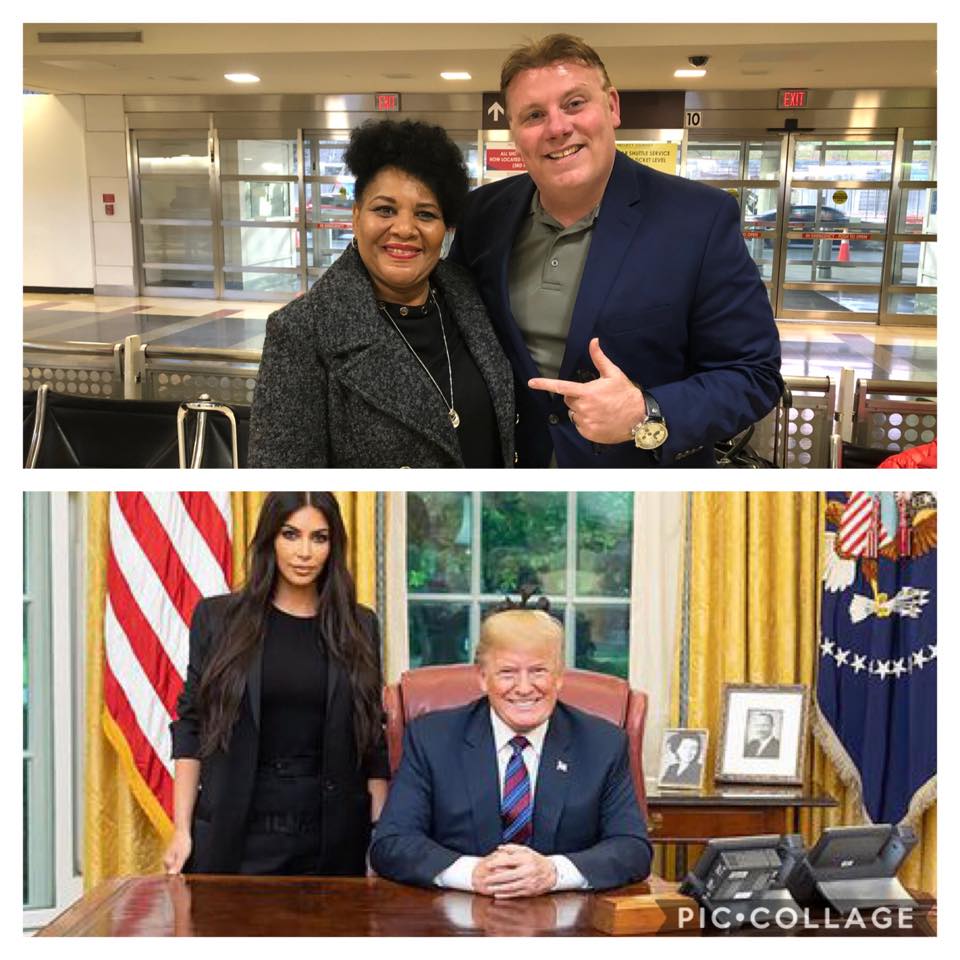 THIS JUST HAPPENED – Yesterday, I was sitting at my gate in Charlotte waiting to board my flight home to DC on American Airlines and it’s packed. Walking towards me was an African American woman and my parents raised me to consider others more than myself so I offered to get up so she could have my seat.

She said “no thank you sweetheart” and she elected to sit next to me and we talked for 20 min before boarding. Then we small talked about life and the conversation went to the Lord. She mentioned Chuck Colson (who I told her I met at his 75th birthday party) and she was surprised and this led to another discussion. Next thing I know she says, “I’m the woman who was in prison when Kim Kardashian recently went to the Oval Office on my behalf and President Trump had me released.” Wow!! For nearly 22 years she was incarcerated and God used Kim and POTUS to help grant her freedom.

We talked another ten minutes and she shared some amazing stuff and her and I had “Church” in that Charlotte airport! I told her about Paul & Silas in prison and God rocked their hearts and the house. She shared that Kim & Kanye just had her in their CA home and she will be in their upcoming “Keeping Up With The Kardashians.”

Her 75,000 word book will hit bookstores soon and she told me the title but I promised not to reveal the book’s name but it will be powerful. It was a Divine Appointment and the Bible says, “be kind to strangers because some have entertained angels unaware.” I’m so glad I was willing to be kind and reach out to her.

God was all over her. As I got off the plane at Reagan I smiled because this huge poster of her was welcoming her to the city of my birth. We exchanged business cards and I told her I had a burden for Hollywood and would love to lead a Bible study to some of the “stars” and Kim has been on my prayer list for several years.

The pic above is Kim recently in the Oval that went viral. The fact is – ALL of us have dropped the ball, did things we are ashamed and lived less than perfect lives. Even greater than Kim going to the White House to appeal to the President for a pardon we have an even GREATER liaison who went to bat on our behalf more than 2,000 years ago when the Son of God, Jesus The Christ would go to a cruel cross at Calvary and pay our sin debt with His own blood and we could be set free. All of us were enslaved with a past, incarcerated by guilt and shackled to sin while sentenced to a life without parole but while we were yet sinners Christ died for us and grants freedom to those guilty. We can be released not because we are so good because Jesus is so God! #SlapYoNeighbor

The Lord is our advocate, counselor and Judge who paid our price and exchanged His grace for our guilt and granted FREEDOM because of His forgiveness. The Bible says, “there is one Mediator between God and man” and it’s not Mohammed, Buddha or organized religion but JESUS, The Christ.

We reunited again just now getting our bags at Reagan National Airport and she gave me a hug and I kissed her on the cheek. #Ebony&Ivory Thank God for grace, second chances and pardon not just from a president but the Prince of Peace. Well done to Kim and Kanye but the King of Kings does all things well in His time. This will be a Christmas to remember for Alice Marie Johnson and rejoicing with her in her family in her newfound freedom. The Lord was all over her and she is on fire as a born again Christian. I’m so thankful that our future with God is greater than our past. Ain’t God Good! For more info on Alice’s amazing story of redemption and pardon visit SecondChancesWork.org  🙌🏻🙏