FIRE in the FIELD

It has been three weeks and I am still digesting and processing what God did in our midst in Monroeville, Alabama.

Some skeptics suggest revivals are obsolete, tents are outdated and evangelism is out the window simply because it is too hard or offensive. One respected church leader said years ago, “It’s not that revivals don’t work but too many Christians are not willing to come together and work!” Praise God the folks in Monroeville, AL had both the work down and the worship going up! I am pleased to report that God is still in the SOUL SAVING business! The Lord has a remnant of believers that are still seeking God on their face and with all their heart and we had a taste of the Trinity in a fresh, tangible way this past month. Without question, it was one of the easiest and most exhilarating times of my life but also emotionally exhausting. After the fine folks in LA (Lower Alabama) prayed for years for God to touch their community the Lord answered in a powerful way. Countless clergy, churches and Christians came together as a army of believers to lift up JESUS and reach their community for Christ. My  friend Gerald Simmons led us to the throne with Brad and his amazing county-wide choir and you got to hear them action in video above. The tent was rocking while praising the Rock of Ages.

A precious businessman from Florida donated the canvas cathedral and even paid for his hired staff to bring it in his 18 wheeler tractor trailer and had them to assemble what he loaned for FREE! One dear brother loaned the property and his pristine grass field became a parking lot that helped pave the way for scores to be ushered into God’s Presence. Talk about above and beyond hundreds of folks donated food feeding the masses nightly. They had everything from BBQ to burgers and it was not only delicious but Heaven on Earth! A local baseball team also assisted in erecting the tent and for months people prayed continuously for God to do what only He can do. Pastors of various denominations came together, got on their knees, rolled up their sleeves and walked by faith and in unity allowing God to minister and take the reins knowing He Reigns! A special shout out to John and Jeanette Bush for their amazing preparation in meeting with clergy, team leaders and opening doors in public and private schools. We were fortunate to get into a dozen public and private schools and speak life to thousands of teens while in town! 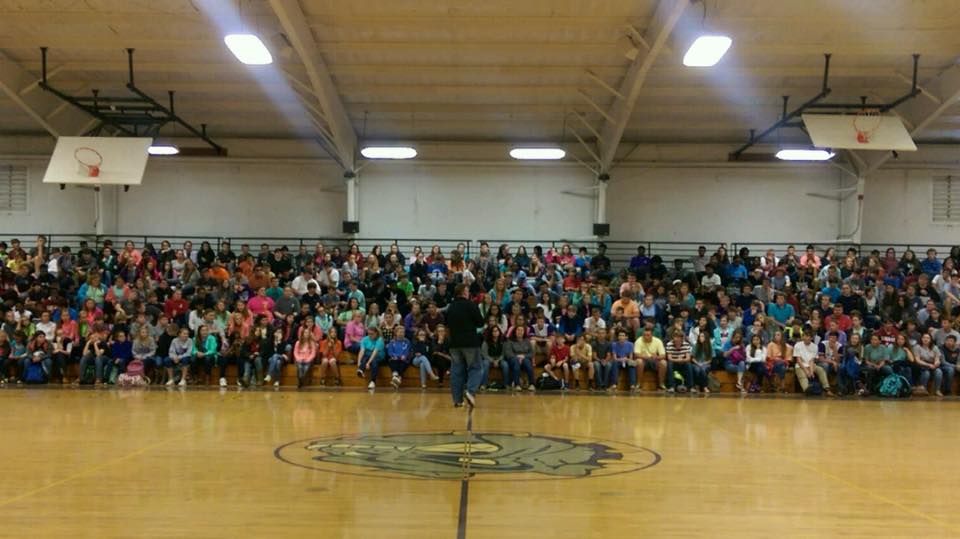 We hit the ground running and spoke in schools by day. Hit FOUR radio shows in the afternoon and was on both Country and Christian radio shows. We even broadcasted live twice from my friend, Phil Allen’s radio show at a local car dealership. When you are ON AIR quoting Garth Brooks one minute and God the next it gets excited mixing the secular and spiritual. We went from ROLL TIDE to ROLL JESUS! At night we trekked back to the tent and the massive tabernacle seats over 2,000  and on opening night many were not sure what would happen but they knew God was up to something. Initially some suggested that only 500 seats be installed and pull in the tent but God honors FAITH and they assembled the chairs to capacity. What happened next was ALL God! The cars came and came and came. Church buses came from miles around and the Holy Spirit descended on us and God packed out the tent.  Go God! Hands down, a sweet Spirit is in that place and God’s Presence permeated the entire field. They had prayer gatherings for 12 weeks leading up to it and folks were already getting saved in the field. It is true NOTHING happens without prayer. They prayed, prepared, promoted and once it was time to preach the Prince of Peace did the rest! Young boys were getting a burden to share Jesus with their friends and on opening night “Fire in the Field” lived up to its name because the FIRE FELL! #BurnBabyBurn 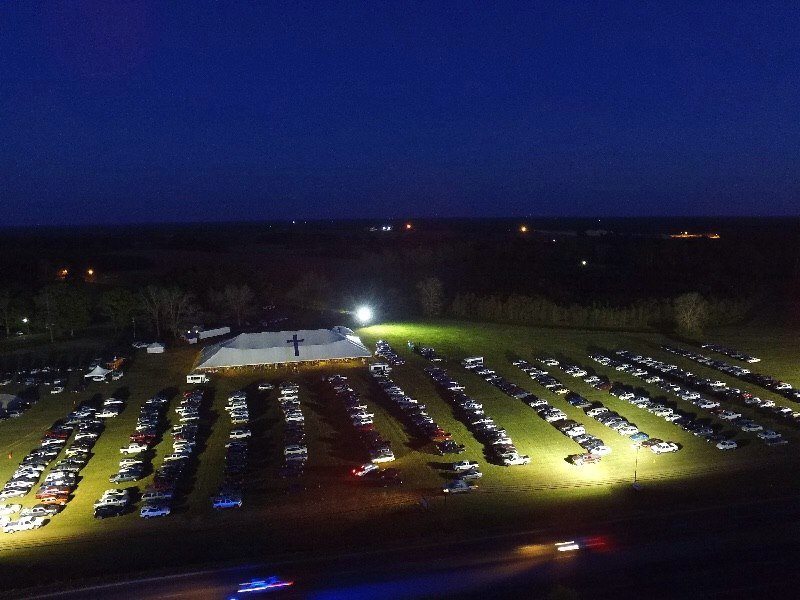 The tent became the talk of the town but what was on everyone’s lips was not the music or minister but The Messiah. Jesus and revival was the word on the street and students were bringing their friends to the revival and trusting Christ as Savior! Senior citizens responded to the altar call and gave their life to Christ with tears. One 71 year old man got saved one night and two nights later brought a senior citizen friend and he got saved. A family of four got saved! One man’s two sisters got saved and two pastors of two different denominations both had teenage children of their own family repent of sin and give their life to Christ. Praise God! Folks were saved in restaurants after the services and people didn’t want to leave. Churches are having greater attendance because the saints that were stagnant are now back on the firing line not only bringing friends but leading others to JESUS! Saved people should want to see people saved! LISTEN to this brother’s testimony below (video) of family members coming to faith in CHRIST!

The revival that was to conclude on Thursday night was extended TWO more nights. The tent averaged 2,000 nightly and over THREE HUNDRED and FIFTY FIVE SOULS were saved trusting Christ after hearing the Gospel. John Bush and his amazing team had 84 trained counselors that took a three week course in preparation to counsel those who would make commitments to Christ. We told them a decision must become a lifelong discipleship process. Counselors met one on one for thirty minutes in a adjacent tent praying with them, talking to them and answering questions to what just transpired, They also received some materials to help them grow in their walk of grace with God and are already following up with those who got saved. Folks to this day are still coming to the tent wanting the Presence of God. Reports are still streaming in of perhaps another fifty souls saved because of God moving in Monroeville, Alabama. You know it is a move of God when the meeting is over, the ministers have left and folks are still hungering for GOD! As long as I live I will never forget what God did in our midst and when some selfless saints came together and wanted desperately to see God invade their hearts and homes. For three nights in a row the rain try to dampen the move of God and mood of the people. We were unable to park on the field and a decision was made to park across the street and churches buses continuously shuttled folks across the road and dropped them off at the tent. One adult woman said, “It was the most joyous ride in my life. Everyone was talking about JESUS!” Interesting enough the crowds came and it may have worked in our benefit and God truly makes all things new! Dozens of calls have come in inquiring if the tent could be taken to different pockets of the country. Church leaders from three different states came to the tent to see if mass evangelism still works and all of them not only agreed but wanting to bring it to their region. The tent reminded me that God doesn’t need games or gimmicks but when we seek His Face and get back to basics He shows up. At the three minute mark you can watch firsthand of citizens of Monroeville share what God did in our midst.

Just this week, I was back at the United States Capitol three times meeting with various Members of Congress and it is a fact that more Christians are in this Congress than the last ONE HUNDRED years! Read that again! Ruth and I were honored to attend on April 26-27, 2016 in Statuary Hall an event hosted by the Speaker of the House, The Honorable Paul Ryan and my friend, Pastor Dan Cummins and we witnessed over FORTY Congressmen and women publicly cry out to God for revival in our land. AMERICA NEEDS REVIVAL and it must first start in the Christian’s heart and home. Everyone wants to change the world but few want God to change them first. We are guilty of too often wanting to blame the school house or White House but our house is a wreck for too many believers. Pride has taken precedence and the cancerous cousins,  Arrogance and Apathy have taken the driver seat and those with the help of the Holy Spirit desiring to win the lost have either been deduced to the backseat or thrown under the bus.  Last year, 9,000 churches in America baptized ZERO! One woman approached Evangelist D.L. Moody and said, “Preacher, I don’t like your methods for trying to reach others for Christ.” Without missing a beat the revered reverend inquired her methods and she said, “I don’t have any.” At that point, Moody with Bible in hand heading out the door to preach the Gospel said, “I like my methods better!” The morale of the story is we need to get busy doing the work of the Lord and be intentional and relational in reaching the lost to our Lord. God saved possibly 400 souls in less than 10 days under and around the tent and when a body of believers graduated from spectators to selfless soldiers in God’s Army. Yes defense may win sports championships but OFFENSE builds the Kingdom! It is a sad commentary when elected officials in Washington are pleading for revival more than some church leaders we have a problem. I believe that the fire that ignited in Alabama will spread across America and I even see the tent being invited and installed in Alaska. From coast to coast and perhaps around the world and if you would like more information please call my friend John Bush 334-201-9493

The Bible is clear, “He that wins souls is wise” and may the revivals that started in Alabama engulf to an enferno across America and beyond. This is God’s doing and glory to His Name!

ALABAMA BAPTIST PRESS ran this wonderful article on June 9, 2016 on what God did at TENT REVIVAL. #GloryToGod