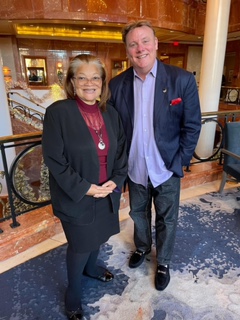 Earlier this month, Frank while in the Peach State had the honor to have a private two-hour lunch with Dr. Alveda King in downtown Atlanta. She is the niece of Dr. Martin Luther King, Jr. and what an honor it was to discuss faith, policy and partnering to fight human trafficking. Her organization has verbally committed to holding a press conference at the Super Bowl in Los Angeles to help eradicate this evil epidemic, particularly with stealing children at home and abroad. Most don’t realize that kids are being abducted against their will in both major cities and small town USA. Frank and his friends have been serving on a national task force for several years fighting trafficking while serving with professional athletes to help shine a light and make things right (Video below). More than ever, we are living in a culture of death but the Lord promotes LIFE and liberty. Teamwork makes the dream work and your prayers and generous giving help us fight the good fight. We at Frank Shelton GLOBAL are watching God save souls both literally and spiritually one at a time. 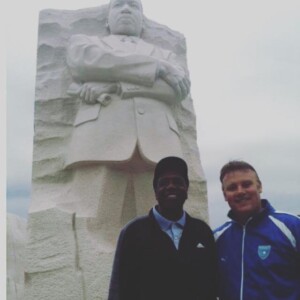 As we enter a new year and celebrate Martin Luther King’s legacy on January 17, we must also realize it is imperative that we UNITE against racism and promote evangelism. Frank was asked by Dr. King to close the meeting in prayer and I know MLK would be proud of her great work. One of our favorite pictures from the past is Frank and his friend, the late Harlem Globetrotter Meadowlark Lemon at the MLK Memorial.  In the meeting, Frank shared with Alveda that he proposed to his wife, Ruth on the very steps of the Lincoln Memorial where Dr. King gave the “Dream Speech.” Her smile was wider than the Georgia state line!

On a side note, you must absolutely go see the new movie “AMERICAN UNDERDOG!” NFL great Kurt Warner’s story is an inspiration to all and he went from bagging groceries in a       supermarket to throwing touchdowns and becoming MVP of a Super Bowl. Kurt and his wife have also loaned their voice and platform to help us fight trafficking and watch the movie in theater      and learn from video HERE. If you would like to help us in this battle reach out to our office. Enjoy the new trailer to the incredible movie in theaters NOW! We are thankful for divine       connections and with God, grace and grit – Dreams Still Come True! #PraiseTheLord