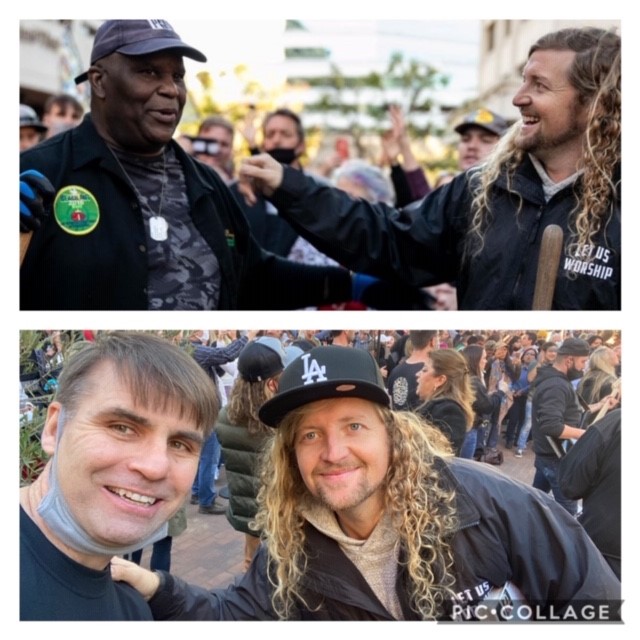 What an honor it was to preach on New Year’s Eve at the historic Azusa Street Mission in Los Angeles, CA. My good friend, Apostle Fred Berry and his wife, Wilma for over a decade have been pastoring at the famed church that God sent revival in 1906. The Lord used that extended meeting to not only birth a pentecostal movement but bring racial unity that was fractured previously. Pastor Fred and I served as chaplains at the 2012 Olympics in London together, 2016 in Rio and were scheduled to have been in Tokyo for the 2020 summer games but Cov19 threw a curve. Fred is both a preacher and evangelist but also a true visionary and he has his pulse on the present, finger on the future but knows his history from the past. He graciously invited another cherished friend and fellow evangelist Randy Shepherd to also come minister and he has been at six Olympics. The three of us were on hand to be part of this incredible move of God and Fred invited SEAN FEUCHT to some lead worship on his “Let Us Worship” tour that culminated the last day of the year in Los Angeles.

God has used Sean and his praise team greatly while boldly but lovingly preaching the Gospel and praising Him in the midst of a pandemic. The boldness comes from being right with God and understanding the urgency of our times. Sean had ran for Congress in the past and thought maybe that was his mission but where he thought he may have a seat in Washington the Lord wanted him to make a STAND across America. After the tragic death of George Floyd the Lord impressed Sean to show up in select cities with his guitar and turned the riots into revival. Prayer and praise extinguishes problems and protests all day long. What George Soros help fund Sean showed up by faith on a mission from God and wanted to shine a light in a dark time. Antifa can’t compete with the Almighty and yes “black lives matter” but the song still is true, “red, yellow, black and white” they are ALL precious in God’s sight.

On Memorial Day (2020), I was preaching an outdoor service in Maryland and said, “God showed me we would see riots, revival and then the Rapture.” Three days after that statement cities were literally burning to the ground. I was booked to preach in TEN countries last year but the “planned demic” tried to halt our mission but you cannot stop The Message. After just preaching in five cities and five days in Nicaragua in February and invited to preach to 150,000 Muslims in Pakistan and then Tokyo cancelled the Olympics I was not going to sit idle and do nothing. After prayer and praise and non stop preaching on radio, TV with multiple “drive in” worship and occasional indoor service when the invite came to spend New Year’s Eve in California I was in my mind already on the next flight. That day last week was EPIC at Azusa Street and I had the honor to minister there once before a couple years ago while still on staff with the Billy Graham Evangelistic Association but I knew Los Angeles was where I needed to be. Pastor Fred and Sean planted a tree to display racial harmony and then after a couple pastor’s prayed the PRAISE kicked in. God showed up and the streets were packed! Folks were atop a neighboring building worshipping with us below while a CBS News Helicopter circled above to film for their television audience that night. Souls were saved, addicts delivered and the hurting found Hope.

Pastor Fred made a great point, “We are so concerned about being six feet apart when we should be more scared of being six feet under dead without Christ.” The virus to date as a 99% recovery rate but you have ZERO chance apart from salvation in Jesus. It has been aptly said, “Hell is too long to be wrong!” In my sermon that night I preached, “Last year, I preached in Nicaragua at the invite of President Ortega’s wife. I didn’t go because I am a Communist but because I am an EVANGELIST. In March 2020, I was invited to fly alone to Pakistan and preach with the Taliban on the roof tops but Cov19 cancelled the outdoor crusade. If you think I was going miss preaching in Los Angeles tonight you are wrong! Regardless, if at home or aboard we preach the Gospel saving message, “Jesus loves you and He’s the only way to Heaven.” I then concluded, “Los Angeles, I have Good News! God loves you!” The crowd erupted with applause. God showed me the lies of the Devil in advance and as you can see by the picture below that Wuhan China where the virus was released had capacity crowds for New Year’s Eve while America was shut down. While our Congress is debating on gender pronouns and tyrannical leaders demanding lockdown we figured it was time to watch God score a TOUCHDOWN! 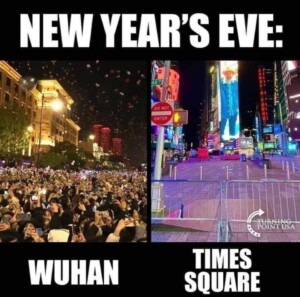 Thankful for Pastor Fred’s leadership and Sean’s worship and it is a privilege to be in partnership with like minded ministers who are willing to against the grain, reject the status quo and stand in the gap with a guitar and God’s Word. I was voted the nicest in my class as a kid but lately been one of the most bold as an adult. People need Jesus and while most of the world play it safe we are sharing JESUS SAVES! The Holy Spirit showed me a year ago that ‘soul winners’ would be labeled as murderers for meeting. The Bible says, “Don’t despise the assembling of yourselves in church especially as the Lord is closer to appear” and where we get falsely labeled as wanting to kill people in fact we have a front row seat to watch God save souls.” Lately, some of the biggest churches have the smallest spine and if we cannot worship God in the lockdown we may not be used to preach as an ambassador for God with or without a microphone in days to come. We are praying for all those in authority but God and His Gospel are essential and if you have to wait for the government to say you can worship than we may have a long wait. People are hungry and hurting but HELP is on the way because we preach Jesus is The Way, The Truth and Life.” We don’t need a vaccine made by man but preach salvation and healing found in the Blood of the Lamb.

Ironically, on a building in the alley where the worship was held on Azusa Street was a mural of Michael Jordan. Randy has been friends with MJ for thirty five years and in town where everyone as of late has been doing it for KOBE we are doing it for The King of Kings. Happy New Year, praise the Lord and God bless California, our country and the citizens of all continents. People need the Lord and let’s roll! 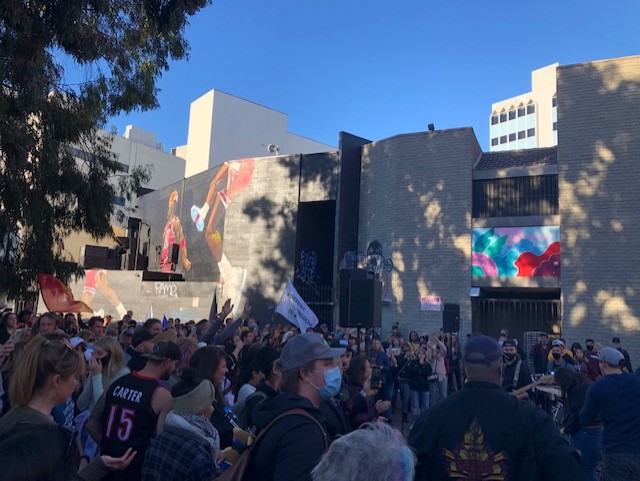