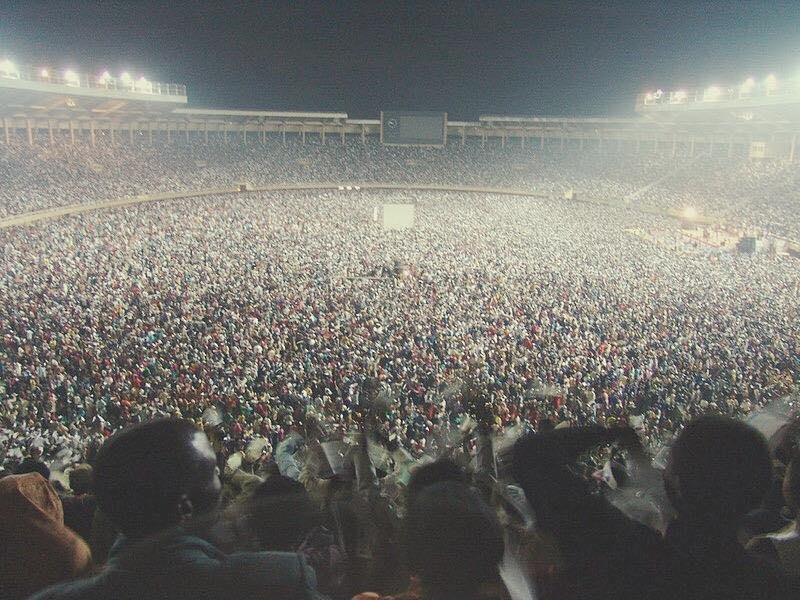 Nearly 20 years ago, God gave me a vision at a dark time in my life and ministry. Ironically, it was “officially” starting and I had already been ministering since a child but while the ink was still drying on my ordination it seemed like things were falling apart. Satan was already trying to derail God’s assignment but looking back I am in good company – Jesus and John The Baptist had the same thing happen to them and countless Christians since. The Lord showed me that I would one day minister to a sea of people overseas. WORD to the WISE: Never doubt in the dark what the Lord showed you in the light (Dr. Adrian Rogers). That vision was a blessing that kept me moving forward by faith. Sometimes God answers prayer over night but other times it can take weeks, months, years and now fast forward just shy of two decades. Yes, I have been beyond blessed and ministered overseas at various churches, conferences, cruises and crusades but I kept thinking of the vision God gave me. Not because I was ungrateful but trying to see in reality what God showed me by faith.

Last year, my dear friend Pastor Chuck Balsamo was invited to speak at the iconic Nelson Mandela National Soccer Stadium in Uganda, Africa on New Year’s Eve! I saw it spread like wildfire on Facebook as the video went borderline viral and I recall being so proud of him! I wrote a couple of encouraging messages on his wall and was so excited to see how God used him. Nothing more – nothing less. I learned long ago that we can be INSPIRED by others we should never be INTIMIDATED. If God did it for one perhaps he would do it for another? When he returned he contacted me noting, “Frank – looking back on my timeline you were one of the only if not only preacher to take time to encourage me while God was blessing me at another level in my ministry!” I have shared for years that Bible college taught us how to exalt Christ but we often fail at complimenting others.

Two months ago, I got a call at 7AM from none other than Pastor Chuck. He was not intending to return back to Uganda this year but the pastoral committee in Africa mailed him a poster with his picture on it promoting to all that he was speaking back at the massive stadium to help ring in the New Year for 2017. Pastor Chuck then says, “Frank – I believe God wants you to come with me and I have already asked about you preaching at the stadium and couple other events while in Africa.” LEADERSHIP LESSON – Until we can compliment others in their promotion we may never be ready for our future promotion. Plus, when you honor others – God will honor you. The back story was Pastor Chuck had visited years before and en route to the airport he saw a massive stadium in the distance and he said, “What is that?” When they told him the Nelson Mandela Stadium without missing a beat he pointed out the window and prophesied, “Lord willing – I will be back to preach there one day!” God answers prayer and several years later he was invited to speak last year and this past week again. The same God that made that come to pass for him (Pastor Chuck) now united us together and what an honor it was to share the platform with him and distinguished guests. We serve a faithful God and He is never in a hurry but ALWAYS on time!

God has been so good to me and I have been blessed to minister frequently on radio and television and couple conferences and churches but this was the largest crowd (in person) I have had honor to preach. Now the vision from the past was present before my eyes! A hero of the faith to me, Dr Johnny Hunt said, “If you don’t SEE it before you SEE it you will never SEE it!” Some suggest seeing is believing but I learned by believing we see. While on the platform a preacher leaned over to me and said that the minister speaking lost the crowd’s attention and said, “We got to get them back.” I had no idea that after the worship I would be the next one introduced to the pulpit! I said a silent prayer and as I was walking up to the podium the Holy Spirit gave me an idea. One of my favorite Scriptures reads, “If I be LIFTED up I will draw all men unto me.” I scratched the opening greeting and joke and went straight for the jugular. It was not in the notes and God showed up and you can hear in that opening introduction within 60 seconds I introduced them to my Best Friend and a minute later they were on their feet, giving God a standing ovation and as long as I live I will never forget the Roar of that Crowd because of their Reverence for Christ. I shared I tonight I don’t introduce you to a Pope, Prime Minister or President but the Prince of Peace, King of kings & Lord of lords. WATCH video below.

The Lord met us in a POWERFUL way! That night after the message, I was invited with Pastor Chuck and a small US delegation of clergy to meet the Vice President of Uganda and pray over him and his nation. Pastor Chuck gave a word from the Lord for the Vice President and Uganda to become a shining star like never before! What a JOY that was and please pray for the precious people of Africa. Here is the VP addressing the crowd after midnight bringing in the New Year (2017). 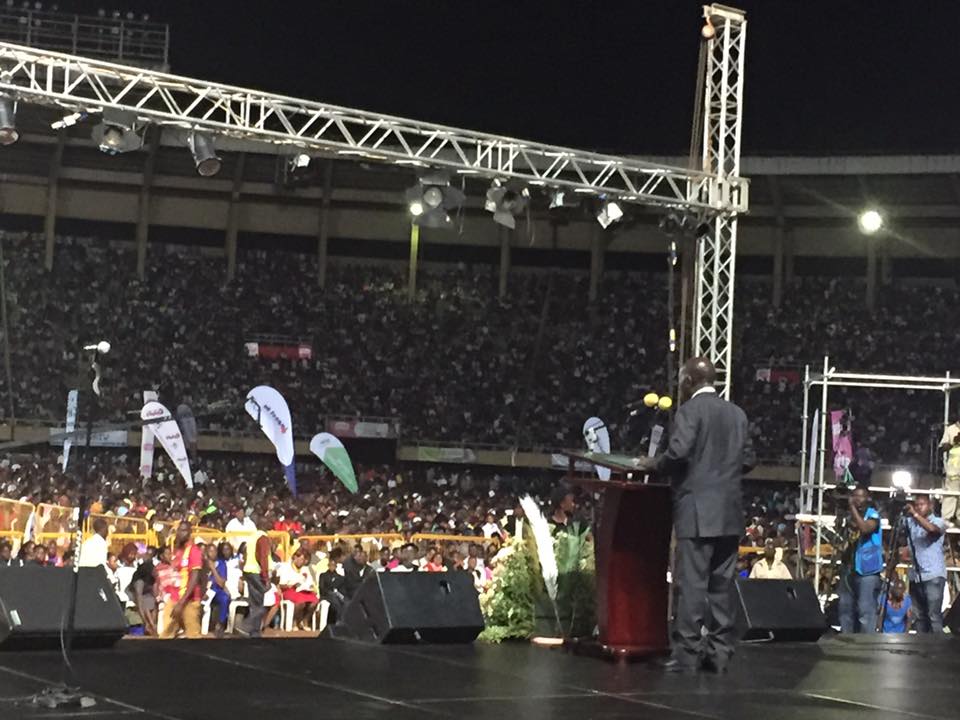 The very next day the crusade organizer from Africa – Dr. Joseph graciously invited me to preach the main service on Sunday at his church @ Victory International in Kampala. God shook the place and He shook me. The ENTIRE altar with the help of the Holy Spirit and a translator was filled to capacity with folks rejoicing and weeping for a fresh touch of God and a desire for their loved ones to come to a personal relationship with Jesus. Those precious people were loving on me and I spent another hour touching them, hugging them and kissing them one by one. They lined up by the dozens and were asking to be prayed over and for a fresh anointing to witness for Jesus. They ministered to my weary soul and spiritual warfare was off the charts the month leading up to the rally. We went through a tad of Hell and Jesus gave away a ton of Heaven while on that continent. It is true – “new levels – new devils.” Fortunately, “Greater is HE that is in YOU than he (devil) that is in the world.” Below are some of my new friends. #Ebony&Ivory 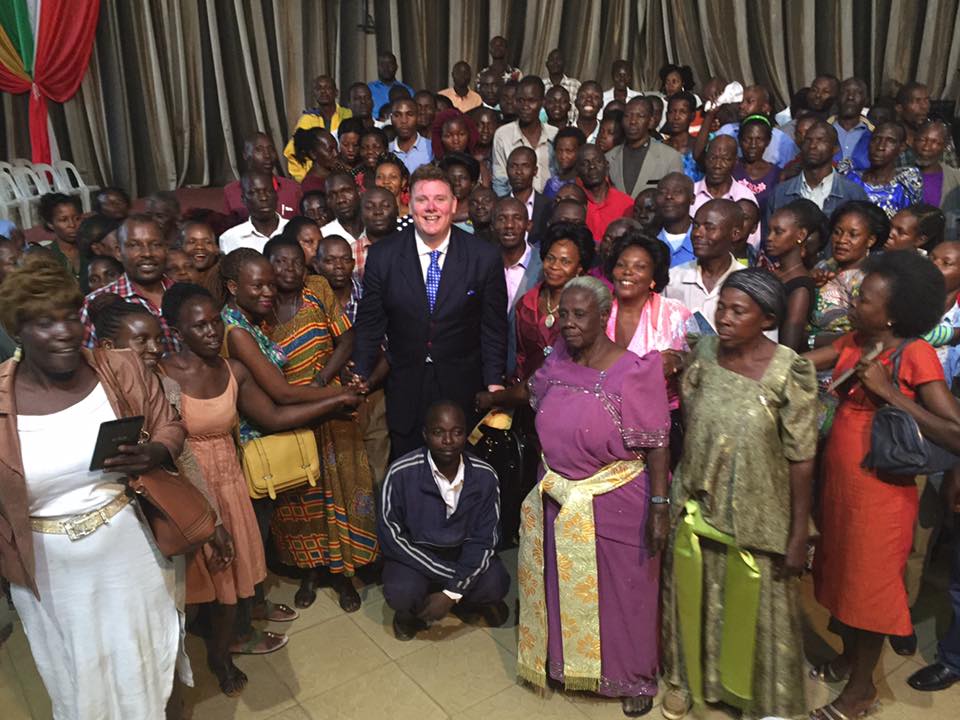 The next day I was invited to preach at the Pastor’s Evangelism Conference with some powerful men of God. I preached for an hour right before Dr. Hugh Osgood and he oversees one third of the entire churches in England. He was Dr Billy Graham’s UK chairman in 1989 and Dr Osgood serves with Archbishop of Canterberry and meets monthly with the Queen to talk spiritual matters. You can tell on my suit jacket that is NOT a shadow but I was dripping with sweat after preaching! My heart is full but the tank was empty. God rocked the house! A special shout out to Pastor Chuck Balsamo of Virginia. He called me two months ago and invited me to come with him to Africa and God used him to open door for me to preach. It takes a mature person to be humble enough to open doors for another. Glory to God and thank you Chuck! 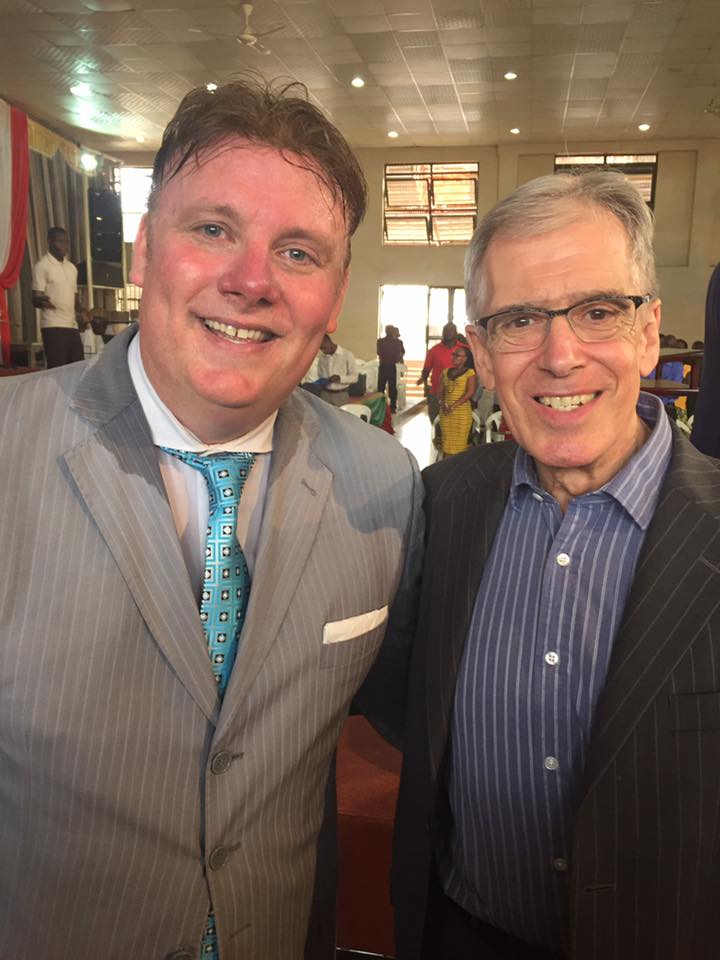