On New Year’s Eve 2013 – New Year’s Day 2014 it was my honor to be a small part of what God did BIG this past week at my friend, Dean Forrest annual BIG GOD Conference in Myrtle Beach, South Carolina. Ironically, on New Year’s Eve last year I was help ushering in the New Year preaching revival in Calhoun, Georgia and we saw souls saved and respond to the Gospel. Exactly, a year later we were blessed to see just shy of two hundred students come to faith in Christ. It.Never.Gets.Old

This was their fifteenth year hosting the Big God Conference and for the past 13 years it has been held at Grammy Winner Ronnie Milsap’s Theater now owned by Beach Church. It is hands down one of the nicest venues I have ever seen and it is gorgeous!

Approximately 1,450 teens from all over the Southeast registered in advance and others showed up at the door while God showed up BIG! Dean Forrest served as our past president with the Conference of Southern Baptist Evangelists and he, his wife, Gayna and son, Geoffrey are amazing, anointed servants of the Most High God. Evangelist Ken Freeman is a powerful preacher and he has been in full-time ministry for thirty five years and witnessed over 200,000 souls saved for Christ. Twice, he was invited to preach to thousands of ministers at the Southern Baptist Pastor’s Conference regarding spiritual leadership. To date, Ken has ministered in 3,000 churches and spoken at 20,000 school assemblies! On opening night, Ken preached to the capacity crowd and
ONE HUNDRED and THIRTY THREE souls were saved! God shook the place!! If you have never heard Jeff Smith share humor than you are missing out! Very few people can connect with Christ and comedy as well as that brother from Virginia and he has been a crowd favorite and invited back annually. 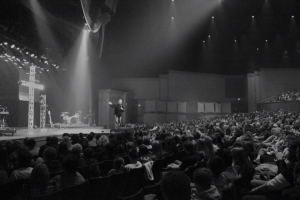 It was my honor to speak on New Year’s eve (above) at the main morning session and I preached “Are You Waiting on the Lord or is the Lord Waiting on You?” I shared if we BELIEVE it we better “Be Living” it because folks are watching. Secondly, I shared how we need to wait on the Lord for our mate and choose to be sexually pure honoring God with our body until marriage. From there I shared on waiting on the Lord for our: Partner, prayers, problems and the Prince of Peace return but we don’t have to wait a second longer for our PARDON because today is the day of salvation! The Lord moved and after Ken witnessed 133 saved the night before I was bless to witness EIGHTEEN salvations the next morning. PRAISE THE LORD! As long as I live, I will never forget after the message when I gave the invitation just shy of ONE THOUSAND teens came out of their seats to respond to the Gospel publicly confessing sin, desiring to wait until marriage for sex, giving their burdens to the Lord and praying for a lost friend that they may come to faith in Christ. One teen told me with tears that God had called him to preach and couldn’t wait to tell his parents and pastor! God moved in a mighty way and they were all ushered out to another complex for individual counselling and follow up. GO GOD!

Later that night, Rebecca St. James brothers sang and they have a group called “FOR KING & COUNTRY.” To say they brought the house down was an understatement. They were the only musical group asked to come back from last year and to usher in the New Year’s was none other than Dove Award Winners HAWK NELSON! Those guys love God and both groups are on fire for the Lord!

Kerrie Roberts has the voice of an angel and I couldn’t be more grateful to God for how He moved in our midst and used Dean and his team. I encourage every pastor, youth minister and church leader to encourage your students to attend BIG GOD Conference in December 30, 2014 – New Years Day 2015! It will change lives and I met people who have attended every single year. Even after their kids and students matured and went off to college the parents elected to keep coming back to volunteer because they see firsthand the powerful transformation that happens during this Jesus packed three day event! For more information visit and/or consider bringing Dean and his family, Ken Freeman, Jeff Smith, Kerrie Roberts or anyone of the ministers from this year event to your church! The Lord is so good, I am honored and blessed to be invited back to preach again this coming year and we truly serve a BIG GOD!