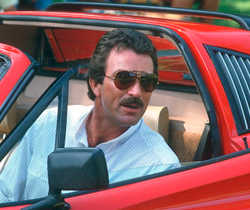 Recently, I read something that floored me. Yes, being born in 1972, I LOVE THE 80’s! That was my era growing up. Personally, tv sitcoms are NOT what they used to be and NO tv theme songs today can compare to those from decades gone by. Regardless, if it were the theme from “DALLAS” with the iconic stadium in the opening scene or KITT from Knight Rider blazing down a desert road. Who could forget the bulging biceps of The Incredible Hulk as Lou Ferrigno was prancing on anyone or anything that stood in his way when the hulk got hot? I love the music from that decade (synthesizers in all) and one of my favorite shows was about a private investigator who wore a Detroit Tigers hat riding in a fancy Italian sports car.

THE REST OF THE STORY: The producers of Magnum P.I. initially approached PORSCHE and asked if they would create a special sunroof for their upcoming tv show. They wanted to use the 928 and requested a custom stretched sunroof for aerial shots of their aspiring actor, Tom Selleck on the sunny cliffs of gorgeous Hawaii. Porsche responded with a note basically indicating: “We don’t cater to customers.”

Dissapointed but not undaunted the producers found what they were looking for in the Ferrari 308 GTS. It was red equipped with more than a sunroof but the sky was the limit with the timeless targa roof that would dissapear instantly with the release of two clasps. When reading this instantly I learned some leadership lessons. BUCKLE UP

The morale of the story: 1) May we never get so “big” that we don’t listen to those around us. Leadership is leading but also LISTENING. Not that Porsche needed anymore help in the PR world but they missed out on a decade of FREE air-time television and commercials when Selleck’s mustache, muscles and wheels raced into millions of hearts with the hit show. Literally, over-night the car became iconic. What is ironic is PORSCHE missed out.

2) Sometimes what is initially dissapointing could be a promotion permenanetly. Tom Selleck next to a Porsche would be like Troy Aikman suiting up for the Redskins. Somethings just go together and the Ferrari despite not being their first pick never took second place or a back seat since starring in their hit show.

3) Leadership makes the hard decisions but it also requires flexibility. JESUS often would be en route to a town or city and then re-routed to heal an individual. GPS is God’s Plan of Salvation. It has been said regarding leadership “if we forget the who we will forget the why?” QUESTION: Why do we do what we do? Secondly and perhaps primary whom do we serve? If cars are to be built with drivers in mind and businesses to serve customers we as Christians need to minister to others on a dime. We can change course without compromising our core values.

As communicators many of us can “speak” in our sleep but to be most effective is the discipline and art of listening. We must be INTENTIONAL about listening to Christ and those around us. In the mid 1990’s, while working in Washington, D.C. I recall firsthand the political demise of Rep. Tom Foley from the state of Washington (west coast). He was not only from the west but his policies were way left! He was so busy serving at the U.S. Capitol on the east coast that he failed to listen to his constituents on the west coast and lost re-election. What made it even more dramatic wasn’t that he was a Member of Congress (Because he was one of 434 others elected to serve the people) but was Speaker of the House when he lost!

Having addressed audiences in both secular and spiritual platforms it is easy for the stage to become seductive. Yes, the platform can get a message or product out but also intoxicate the presenter to thinking they don’t need the advice of those around you or in the audience. Entitlement can creep in and kill you. It is also tempting to believe some of the press clippings opposed to dying daily to self. The Apostle Paul said to “forget the things behind and PRESS ON to the High calling of Christ.” Basically, what he was saying was be thankful for the past victories but put them behind and move onward. Success should be guideposts NOT hitching posts. I once heard a coach implore his athletes to take their trophies and remove them from the public pedastal and place them in a private closet. Those whom won them knew what they had but in order to go and grow to the next level had to almost pretend they were not there. Complacency and arrogance are the two twins that are worse than cancer in maturing your career or character.

In closing, may we learn from Porsche and politicians whom were so busy producing from their platforms that they failed to remember the clients, customers, constituents and “average Joes” on the street. That aspiring actor on Magnum P.I. was an unknown when the request came in but went down as one of the biggest stars in Hollywood history. Everyone is important and if we are too busy to listen than we are underserving to speak. 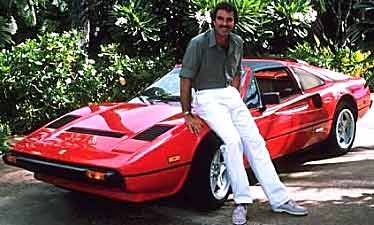