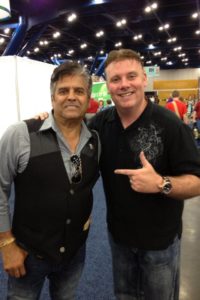 Earlier this summer while speaking in Houston, TX I was able to connect with Hollywood actor and former “CHiPs” star, Erik Estrada. It is safe to say almost everyone loved “Ponch” back in the day. The girls wanted to date him and all the guys wanted to be like him!

Today, he still does some acting but he’s also a deputized law enforcement officer and helps protect students across America and around the globe from the dangers of online predators. Estrada stars in a new movie called “FINDING FAITH.” The film is a story of a teenage girl who was chatting online with a person she was led to believe was her age but when they met things went terribly wrong and the man TWICE her age abducted her. The movie was based off a true story and unfortunately most endings are not “happily ever after.” Too often, those whom are abducted are beaten, sold into sex trafficking or murdered.

The F.B.I. notes that “100% chance that your child, grand-kids, students or neighbors will be contacted at least once by an online predator in their teenage years.” This is a travesty and we can do better! My father, Frank Shelton, Sr. was a fourth generation Washington, D.C. police officer and retired as Deputy Chief of U.S. Capitol Police and my Uncle Charlie was LT in charge of entire K-9 program of the department. For two years, I was a recruit officer with the United States Capitol Police serving in Internal Affairs and Office of the Assistant Chief following my political career before stepping out “by faith” to speak and minister full-time. Since childhood, I’ve always desired to either enter “politics, preach or protect the President (police).” This outreach was a great chance to recognize some of our heroes whom wear the uniform and one doesn’t have to be behind a pulpit to actually have a ministry. The Bible notes: “Blessed are the peacemakers.”

Protecting our children is paramount and I had contacted Erik’s Foundation and invited him to my hometown. One of the greatest honors of my life is not only investing in individuals coast to coast but meeting so many new friends on the road. It has been said: “To whom much is given much is required” and its a pleasure to bring folks to share their wealth of wisdom to my hometown. Plus, you cannot go wrong when you promote others for a worthy cause.

While working four years for my Congressman as his Special Assistant, Constituent Liaison, driver, speechwriter and ocassional speaking surrogate one of the many things that I learned on his staff was how to plan an event. Regardless, if political or civic I love to not only speak but serve and set up but also allow others to SHINE. President Ronald Reagan had a sign on the Oval Office desk that read: “It is amazing what one can accomplish if you don’t care who gets the credit.” It dawned on me that since Estrada plays a sheriff in the movie, it would be a great segway on the eve of anniversary of 9/11 to honor our local police and honor Sheriff Rex Coffey and his entire department both civilian and sworn for all they do on a daily basis to protect and serve. We often hear about the worst in society but these dedicated servants are of the very best.

On Tuesday, September 10, 2013 Erik and his entourage arrived in Charles County, Maryland to a packed crowd at Southern Maryland Christian Academy. With the help of the movie’s producer, Dean we showed his 1 hour and 40 minute movie and then Erik addressed the crowd and signed autographs and spent nearly two hours taking pics and conversing with everyone in attendance. I asked my dear friend, Matt Gaines – Director of SMCA to present the plaque on behalf of the school to Erik and it was my honor to award Sheriff Coffey.

Regardless, if public or private school it is imperative that we help safeguard our students and educate our parents to monitor more closely their loved ones online communications. Predators are already SPYING on them and its important that we WATCH OUT more closely. When we are asleep thugs are awake and they don’t desire to help but harm. The movie “Finding Faith” was not only about a girl named “Faith” but how all of us by grace can FIND FAITH in God. The movie is entertaining, educating but also evangelistic.

I’m convinced every parents and child needs to see this across America. A teacher contacted me about wanting to bring it to Oklahoma and a minister friend in Fort Myers, FL called and hopes to bring it to his church.

Erik was a super sport! He and his dedicated team are “all that and a bag of CHiPs!!” 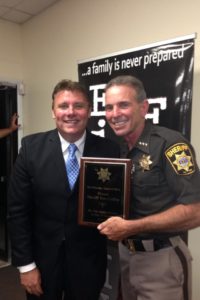 Special thanks to FOX5 NEWS in DC for their awesome coverage of the event and airing 10PM News!
WATCH IT HERE